The main promotional video for the TV anime adaptation of Reiji Miyajima‘s Rent-A-Girlfriend (Kanojo, Okarishimasu) has been revealed. 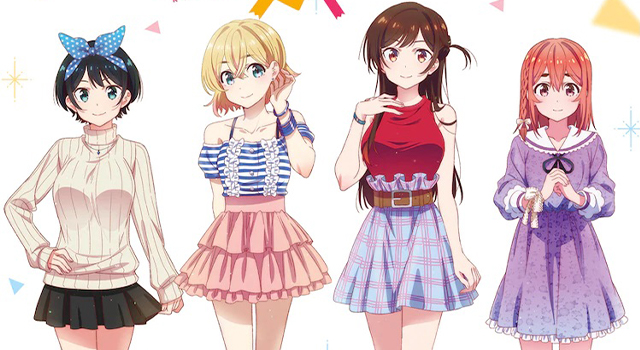 The latest PV starts off with a breakup between the story’s protagonist, Kazuya Kinoshita and his girlfriend, Mami Nanami. The story begins where Kazuya meets Chizuru Mizuhara, a girl he meets via a girlfriend “rental service”. The second half of the PV features the OP, “Sentimental” by the peggies and snippets of the heroines’ daily lives. The character voice for Nagomi Kinoshita (CV: Yukari Nozawa) was also revealed.

The TV anime is slated for broadcast in 10 July in Japan. A teaser PV for the TV anime was released last December:

In Japan, the lonely have a new way out — online services that rent out dads, children, even girlfriends! When Kazuya’s true love dumps him, he’s just desperate enough to try it, and he’s shocked at how cute and sweet his rental girlfriend turns out to be. But she wants to keep their “relationship” a secret, and there’s a complication… she goes to his university… and their grandmothers are in the same home… and they live next door to each other?! And Kazuya finds out she’s not nearly as nice in “real life”…