PV, Key Visual, Staff and Cast announced at one go!

On top of the second season of Cells at Work! announced back in late March, the anime adaptation of the series’ spin-off, Cells at Work! CODE BLACK has also been revealed. Both the new season and spin-off are slated for January 2021 release. 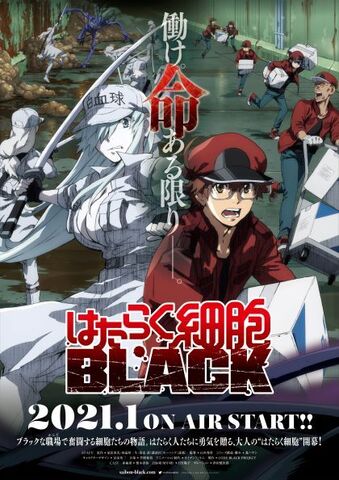 Cells at Work! CODE BLACK is a spin-off of the original Cells at Work! series, portraying the adverse effects of unhealthy lifestyle habits such as consuming alcohol, smoking, lack of sleep.

Hideyo Yamamoto (Director of Strike the Blood series) will direct the spin-off and LIDENFILMS will be in charge of the animation production.

Junya Enoki will play Red Blood Cell AA2153, Yoko Hikasa will play White Blood Cell U-1196 and Kenjiro Tsuda will be the narrator.

Check out the PV for Cells at Work! CODE BLACK:

Here are some staff and cast comments:

“I write while living in fear of problems that are happening within my body after I hit 40, such as Dysautonomia and blood in the urine (for an unknown reason). Thanks to the story, I quit smoking altogether for a healthier lifestyle. I hope this story will encourage the salvage of many middle-aged bodies with a ‘BLACK’ internal environment. We can still make it!”

“Anime adaptation! I’m extremely grateful!! And so, so happy! This such great motivation! Recently my stomach has been sticking out a lot more, is this what they call “gaining weight from happiness”? (Oh no, I need to exercise…) To make CODE BLACK a great one, I will work hard on both my health and drawing!”

“What kind of actions will they take, and what kind of values and significance do they hold? To encourage a change of mindset within viewers through the portrayal of characters who are working in such a harsh condition—I will work my hardest to make it happen!”

“My first work on series composition and my days of relying on energy drinks to work on the scripts… The work that I have done while on the verge of caffeine overdose—I hope you’ll love it so much that you’ll have withdrawal symptoms without it!”

“I’m sure this story will encourage many to start caring more for their bodies. Everyone, let’s go for a body checkup! For those who are healthy, let’s watch it with a peaceful mind. For those who are unhealthy, I hope you can relate to the story while watching it.”

“My body started turning stiff everywhere after I hit 40. Through this story, I understood that I’ve been causing a lot of trouble for the cells in my body. I’d like to write some music that’ll make our cells happier and healthier!”

“I had a frail body when I was young; I was just like a king that governed the Pediatric ward. I want to spur on this “BLACK” body of mine and do my utmost. Please watch Cells at Work! CODE BLACK.”

“I’ve never gone for a medical checkup and have been maintaining my health with a lots of health supplements and muscle training, I’ll be fine! I hope this story will spur you on so please watch!”

“I’ve lead an unhealthy lifestyle for the sake of the birth of this story! I’m sure of it! This story will turn my “BLACK” self into a “WHITE” one! Ah, fate has led me here! …Uh… um… I’ll work hard on the narrations! Those who are “BLACK”, it is your fate to watch this!

Here’s the PV of Cells at Work!!, released back in late March when the second season was announced: