Adapted from the Seishun Buta Yaro Light Novel series published by Dengeki Bunko, the anime movie directed by Soichi Masui, Rascal Does Not Dream of a Dreaming Girl, went on cinemas on 15 June. 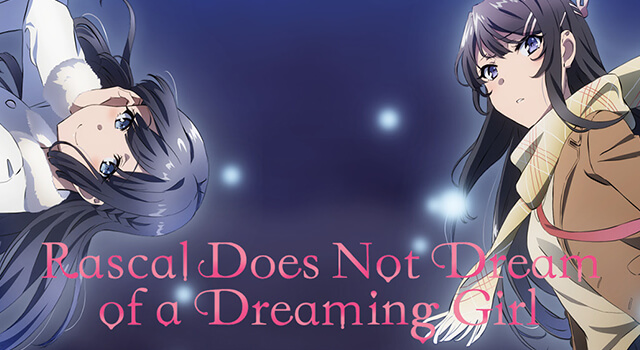 The Seishun Buta Yaro series is written by Hajime Kamoshida, who is also the author of The Pet Girl of Sakurasou, which received an anime adaptation years ago. Keeji Mizoguchi is the illustrator.

The youth fantasy series revolves around the main protagonist, Azusagawa Sakuta, and his interactions with the heroines who trigger supernatural phenomena due to the “Puberty Syndrome”, which is caused by distinctive emotions felt during adolescence. The story also illustrates the love relationship between Sakuta, an isolated figure in high school, and Mai Sakurajima, a high school senior who took a hiatus from her job as an actress.

The tear-jerking movie is a sequel to the TV series, based off the 6th and 7th book of the light novel. The sequel’s plot will revolve around the main protagonist, Sakuta (voiced by Kaito Ishikawa), heroine Mai (voiced by Asami Seto), and the movie’s key character, Shoko Makinohara (voiced by Inori Minase). The movie has performed exceptionally well in Japan, while as of 9 July, the movie has earned approximately JPY 370 million revenue and attracted more than 257,000 attendees. To answer to the overwhelming response, 52 locations were added for the movie screenings. According to a nationwide poll conducted by Kogyo Tsushinsha on 22 and 23 June, the movie ranks 10th amongst movie-goers.

The movie spread across 31 screens and has been in the top 10 for consecutive 2 weeks. A week into the release, the official Twitter of Aobuta movie announced a restock of premium giveaways and merchandise.

Prior to the release of Rascal Does Not Dream of a Dreaming Girl, an advance screening was held on 25 May in Shinjuku, and was graced by the movie cast: Kaito Ishikawa, Asami Seto, Inori Minase, and the movie’s Director Soichi Masui.

Ishikawa, the voice of Sakuta Azusagawa, commented that “it felt like the start of the end” and he is sad that Aobuta is really coming to an end. Those feelings were mixed with happiness and he described it as something “really complicated”.

Seto, who voiced Mai Sakurajima, mentioned that she posted on her blog about failing the ballot for this event. She also conveyed her heartfelt feelings to all fans and is very happy that the movie will be etched into the memories of those who were chosen to be present on that day. Minase, who voiced both versions of Shoko, admitted that a lot of pressure were built up as they had to continue from where the TV Anime series left off. She mentioned about getting nervous whenever she thought about presenting the movie to fans who follow the novel series, voice dramas and TV series. Minase also strongly urged the audience to pay attention to Shoko in a wedding dress and that the scene alone would make it worth a few re-watches.

Masui expressed his gratitude to the cast, staff and production crew who put their all into making the movie. They went through a lot of trouble as they were constantly trying to make the movie better while hounded by the deadline and he admitted that the production was barely completed on time for the event. Masui jokingly mentioned that there are too many points of improvement and the movie would be postponed to next year if they tried to work on them.

Before the screening started, Ishikawa expressed his wish for fans to watch the movie multiple times. He affirmed all fans:

“If you were to watch the movie again, you will definitely cry from the start”

The cast of Rascal Does Not Dream of a Dreaming Girl—Kaito Ishikawa, Asami Seto, Inori Minase, Nao Toyama and Atsumi Tanezaki attended the movie’s premiere, which was held on 15 June.

It was the first time the five have gathered since AnimeJapan earlier in the year. The cast burst out laughing after Ishikawa blushed and commented that he appeared very listless (just like Sakuta?) in a photo within the movie pamphlet. He then expressed his joy after seeing the fans who have gathered to watch the movie, thanking them for looking forward to the movie release.

With reference to the adolescence theme in the series, when asked to give an advice to his own adolescent self, Ishikawa said that it is alright to not try too hard to make friends. After hearing his answer, the cast and attendees burst into laughter and a mysterious cheer started. Right after, Ishikawa commented that his past self would have been shocked at their response and cried in despair, in which Minase retorted that his emotions were seriously unstable. Rascal Does Not Dream of Bunny Girl Senpai, the TV anime series, was simulcast from October to December 2018 on ANIPLUS Asia in Southeast Asia.