Norimitsu Kaiho (Nitroplus) and Sadoru Chiba – the writer and illustrator of the manga School-Live! – lavished praise at the upcoming live-action movie. A screening event was held at Toho Cinema in Kinshicho on 16 November, which was attended by the main cast (Nanami Abe who plays Kurumi Ebisuzawa, Midori Nagatsuki who plays Yuki Takeya, Wakana Majima who plays Yuri Wakasa, Rio Kiyohara who plays Miki Naoki, Nonoka Ono who plays Megumi Sakura) and director Issei Shibata. The cast appeared decked in the full costumes, complete with the familiar shovel, teddy bear and bar.

The cast shared their experience filming the movie. Majima, who plays the leader of the School Living Club, said that since this was their first time in a starring role, they opted for an honest performance. Director Shibata chipped in and said that it was definitely not easy, but he was able to see the cast’s gradual improvements as the filming progressed, and applauded the struggles they went through.

Next, Majima asked the cast if they have any insider stories to share, to which Nagatsuki and Abe enthusiastically raised their hands. Nagatsuki said they were living like how the School Living Club were even when they were not filming, and that the four of them were always doing things together. “It was fun!” she said with a smile. 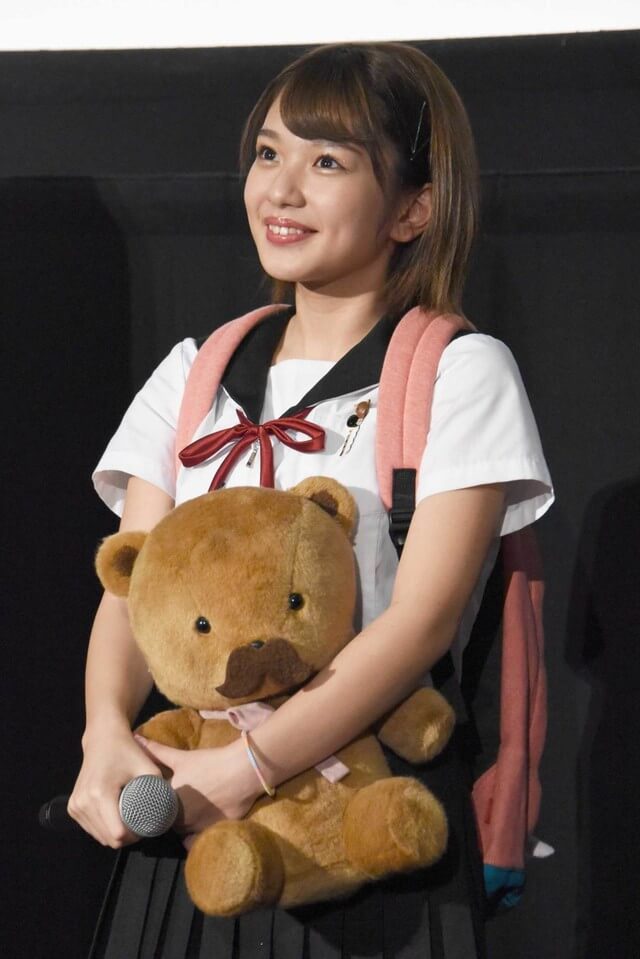 Next, the two creators of the manga Kaiho and Chiba sent their messages of support. The message from Kaito reads, “I had a chance to visit the film set. Within this school set in another world filled with blood and destruction, there exists a space overflowing with a lived-in feel. And it is filled with the enthusiasm from the staff and actors. I saw the real School Living Club that day, and I look forward to reuniting with it on the big screen.” Chiba’s message says, “I think there are expressions and charms that can only be captured in real life. I wonder what kind of “School-Live!” director Shibata has created. I look forward to watching the finished product.” On hearing the messages, Shibata said, “A live-action adaptation would mean that we will not rely heavily on appearances. The biggest challenge is to grasp the perspective of “School-Live!” in this movie. I worked with the confidence that both creators will acknowledge our work.”

It was also announced that the movie’s theme song will be performed by the second-generation of Last Idol. The new group appeared on stage and performed the tune. Abe concluded the event with the following message: “For the four of us from Last Idol, this is the first time we are performing in a movie. We had a lot of anxiety about it, but I believe we have grown as individuals and as a group from it. We will continue to do our best for everyone’s beloved ‘School-Live!’.”

School-Live! will be released on January 2019 in Japan. School-Live!, the anime series, was previously simulcast on ANIPLUS Asia from July to September 2015 in Southeast Asia.