Introduction to the World of DECA-DENCE

A world where humanity is on the brink of extinction.

Let’s do some simple revision before the next episode! 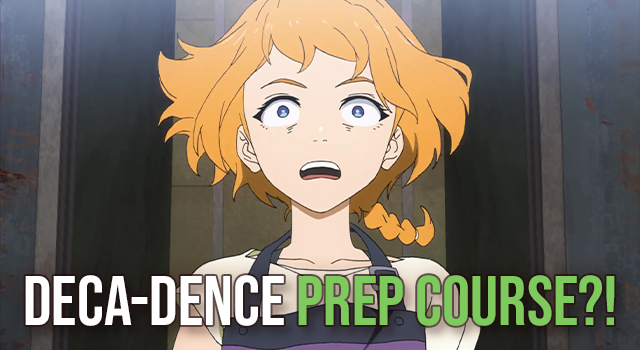 In the first place, what is the whole idea behind DECA-DENCE, and the meaning behind its title?

To answer that, check out Anime News Network’s interview with Yuruzu Tachikawa and Takuya Tsunoki!

👉Check out the gorgeous concept art of the mobile fortress👈

Quoting the above interview:

The themes of this anime revolve around “ruin” and “decline,” so I think it draws from the negative sense of the word. Also, in Japanese, we refer to huge things as “dekai,” so I wanted the sound of “deka” in it.

The “Dence” part is pronounced as “dance” in Japanese, but it has the same meaning as “to live.” So I wanted to convey the seemingly opposite meanings, one of which is the general meaning of “ruin” and the other is “living big.”

Literally living in a big one.

A long time ago, humanity was suddenly attacked by an unknown lifeform, the Gadoll, and lost more than 90 percent of its population.

In this unprecedented crisis, the Gears, part of The Power–a military organization to combat the Gadoll, pooled their intellect and built the 3000m-high mobile fortress Deca–dence. The energy flowing in Gadoll bodies–Oxon–was used in this mobile fortress, and it became humanity’s last line of defence. 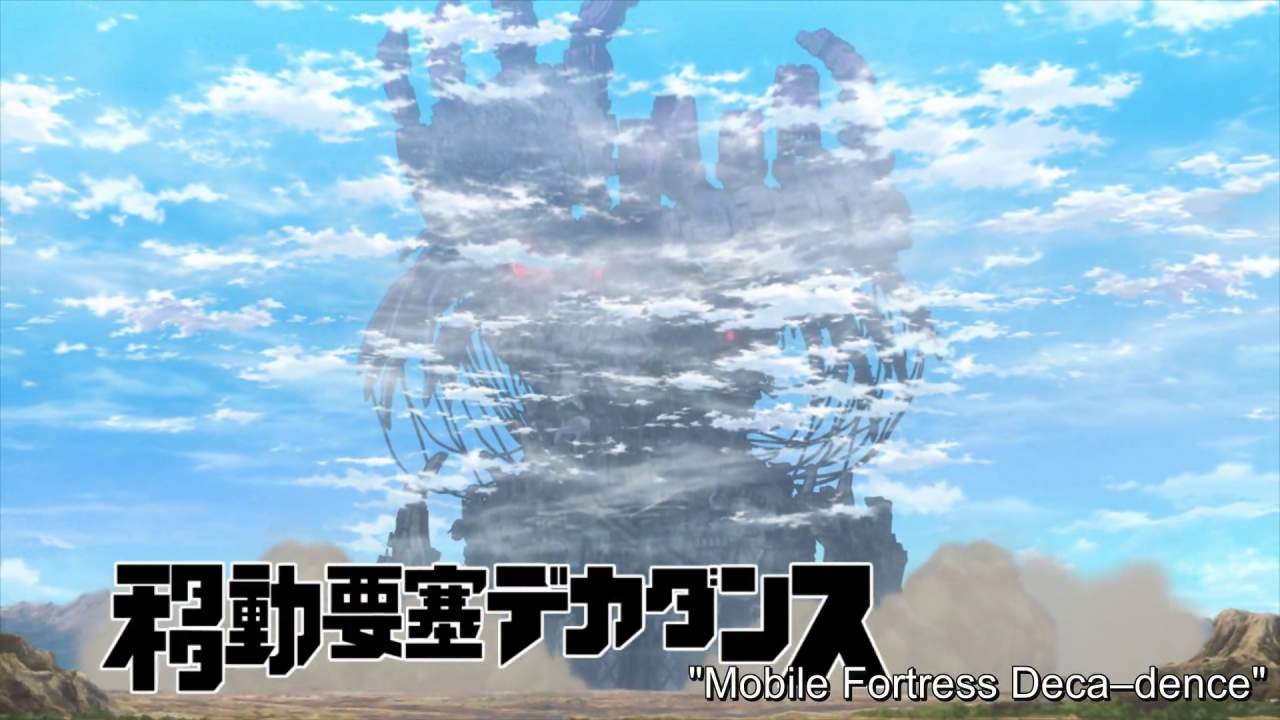 Our peppy heroine of the series: a girl who lost her father and her right arm due to a Gadoll attack when she was a child. Raised up as an orphan in a Tanker orphanage within the Deca-dence, Natsume dreams of joining The Power and fight the Gadoll as a warrior. 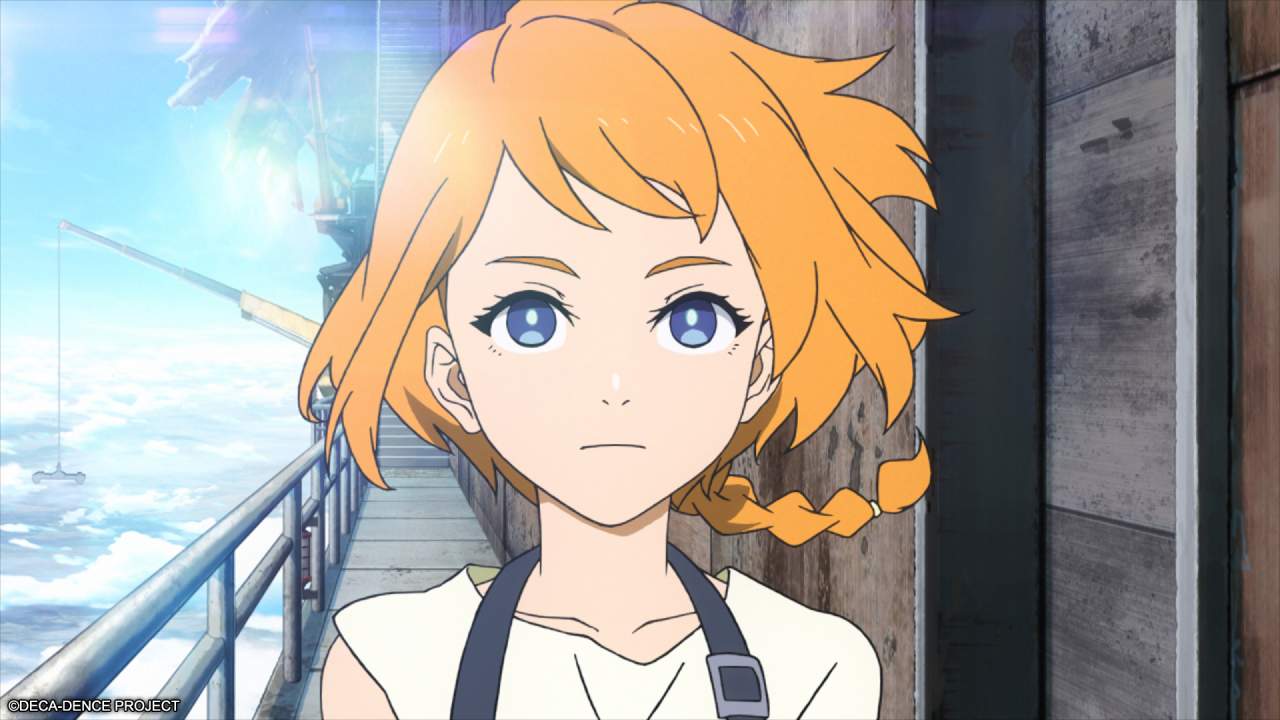 A Tanker‘s duty is said to help the Gears focus on combat by supporting them on the backlines. Once the Gears are done fighting, Tankers process the Gadoll flesh for consumption, and take charge of repairing the Gears’ damaged armor.

The orphanage teaches the children that “Serving the Gears that way is how a Tanker lives.”

However, reality bites as Natsume ends up working under Kaburagi as an armor repairer instead of joining The Power, which she yearns for. Having lost her arm, Natsume is put at an disadvantage as The Power requires its candidates to be “sound in mind and body”.

A verteran armor repairer who is blunt and surly.

Kaburagi spends his days apathetically, going through a mundane cycle of maintaining and repairing the Deca-dence’s armor, eating bland-tasting rations, sleeping and waking up to another day . 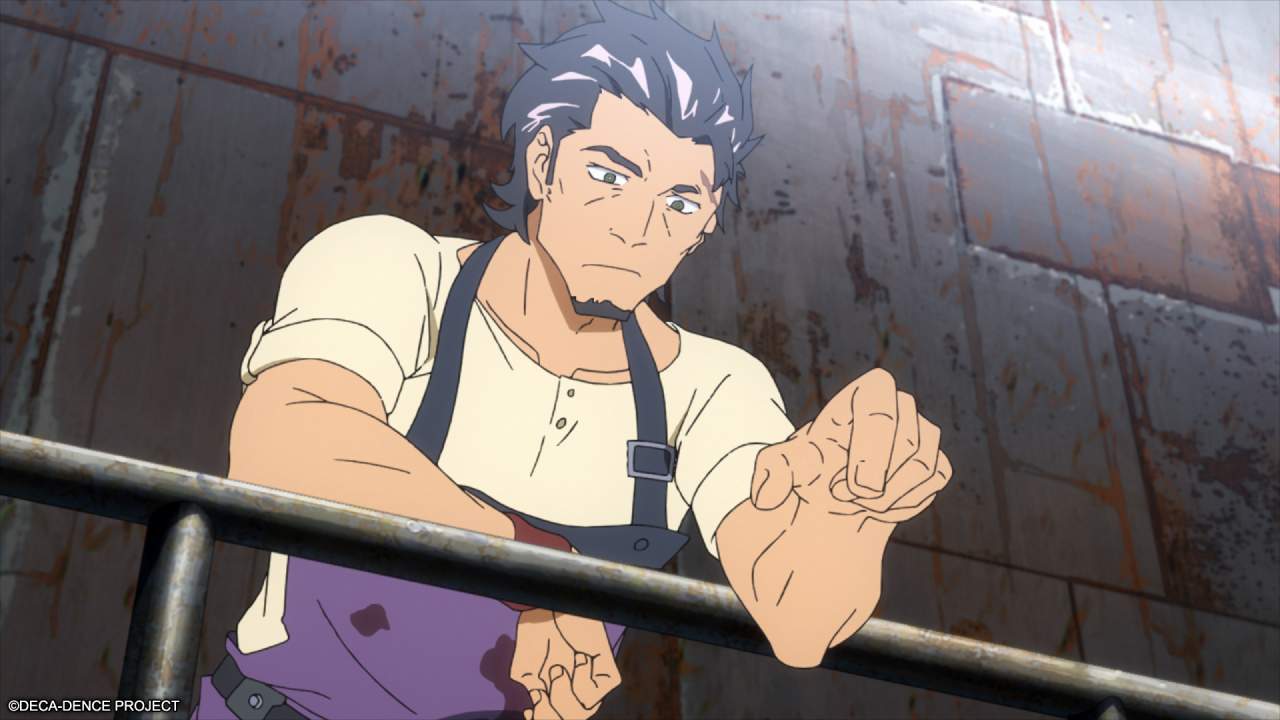 The official character profile states that Kaburagi was once a great warrior who has lost the ardor to fight, but his state of mind starts to change through his encounter with Natsume, who gives her all into living today while never stopping to strive for her dreams.

Unfortunately, Natsume is stuck with cleaning duty for five years as a Tanker newbie.

On the contrary, Kaburagi seems to have a soft spot for Pipe (un-officially named by Natsume), his seemingly harmless and dog-like pet Gadoll. Despite having lost her father to Gadolls, Natsume doesn’t express any hatred for the small one and instead showers it with affection. (how precious!) 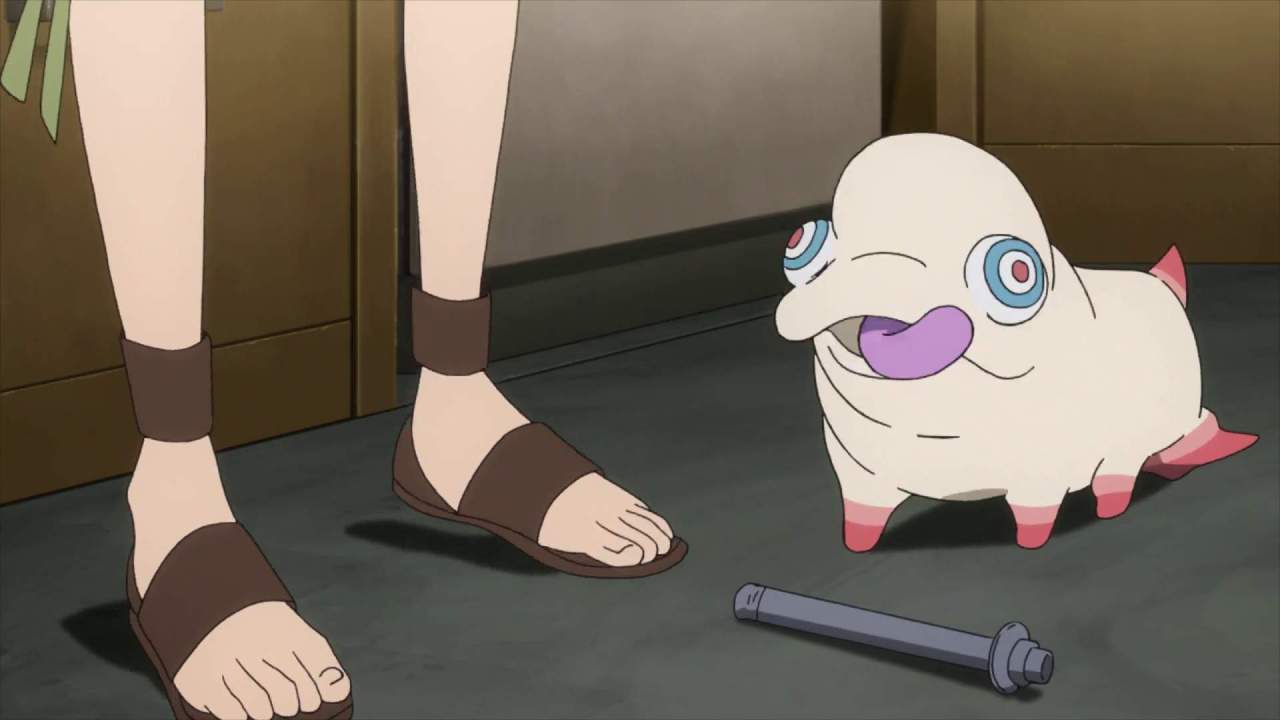 Along a dark alley at night, Kaburagi is seen “retrieving a chip” from a collapsed drunkard with an “error code”.

He is told by an unknown existence that his “bug discover and retrieval rate is extremely low”, and as he leaves, he is greeted with a farewell:

“Well, then. Our world does not need bugs.”

… Bugs? It seems like there is more to this world than meets the eye?!

Halfway through scrubbing the surface of the Deca-dence, Natsume and Kaburagi are dragged into the battlezone of a sudden Gadoll invasion.

While Natsume floats defenselessly within the Zone (a gravity-defying force-field) deployed by the Gears, Kaburagi puts on the equipment he took from a fallen warrior, and maneuveurs smoothly across the air. Beating one Gadoll after another, the man doesn’t seem to have lost his edge as a warrior. 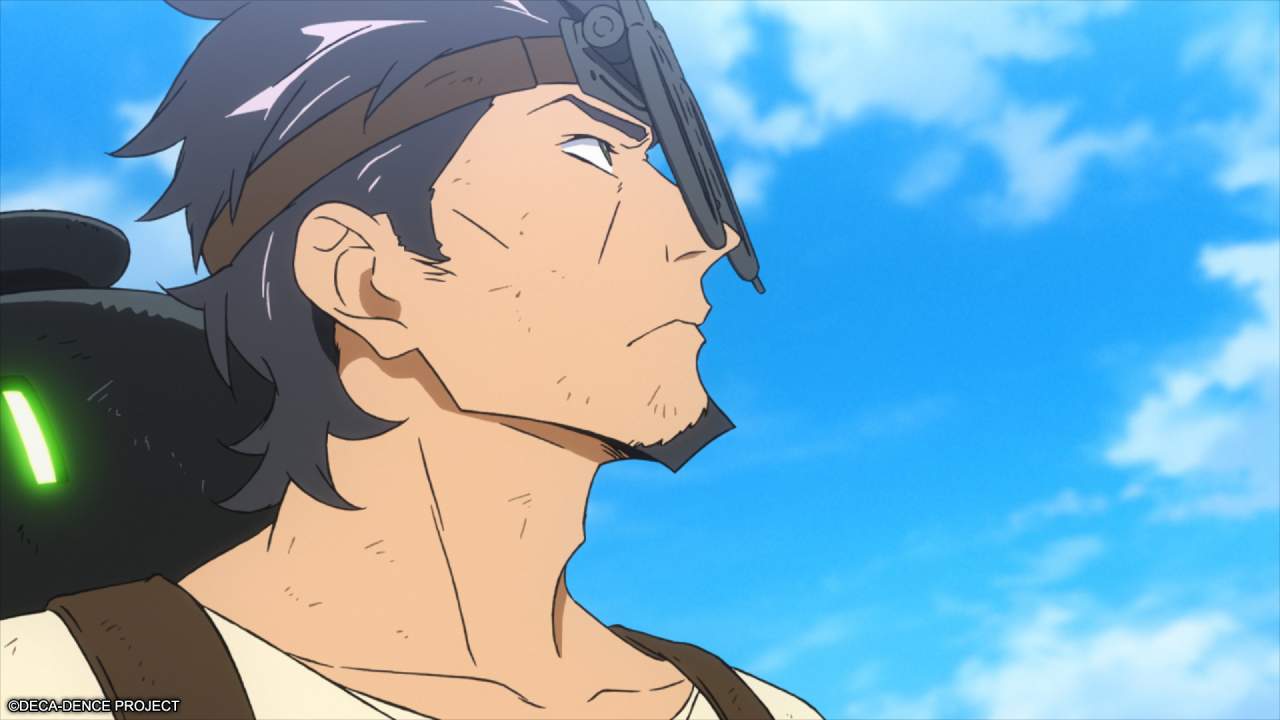 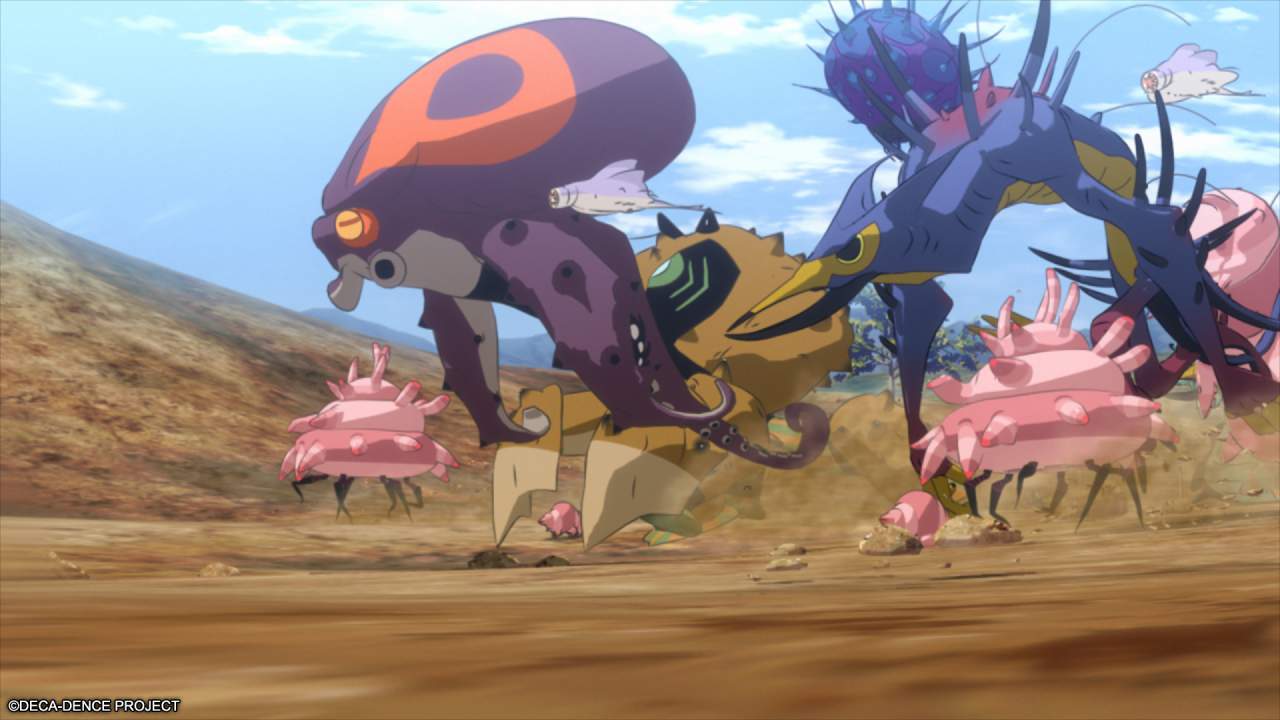 Amongst Gadolls, there are various types known by humanity, and you can check out the official DECA-DENCE Gadoll encyclopedia, which will be updated every week.

Standing atop the command post of the Deca-dence is a man named Minato, who also seems to be an acquaintance of Kaburagi.

Unexpectedly, the Deca-dence starts morphing into a gigantic mobile cannon while blood-sucking harpoons are released from the fortress to extract the large-sized Gadoll’s Oxon. The extracted Oxon is used to power the cannon, which then fires a retractable hammer-like weapon, defeating the incoming Gadoll with the massive impact upon contact. How ironic, getting defeated by their own energy.

And, who knows, the Deca-dence might have some other amazing forms?!

We can’t wait to learn more about the world of DECA-DENCE, which is still shrouded in mystery. What does the future hold for Natsume, and what kind of backstory does Kaburagi have? If you’ve read till this point, you’d definitely want to continue to keep a lookout for the rest of the episodes!

If you ever get confused with the terms that appear in the show, follow DECA-DENCE’s official glossary! The glossary is updated weekly, perfect for you DECA-nerd wannabes!